DHS senior, Ethan Ladyman, is a four year member of the Varsity Wrestling team; the same team to hold Conference Championship since 2014. Ladyman has yet to attend state, but there’s nothing in his way this year! So far this season, his record is 22 wins and 5 losses. When asked about his outstanding performance this season, he responded with, “I beat Whitfield at MICDS. Whitfield took fifth at state in 2016.” Out of 18 people, Ladyman took 3rd and the entire team took 3rd out of 21 teams at MICDS. Ladyman is undecided if he’s going to attend college, but he said he is going to wrestle if the college he decides to go to offers a wrestling program. Best of luck in the rest of your season, Ethan! 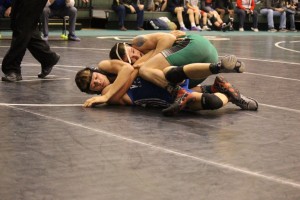