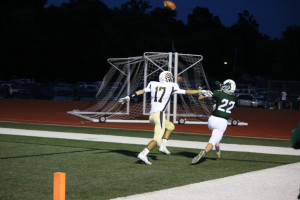 Clayton Snudden, Junior, is a three sport athlete. Snudden scored the first touchdown for DHS this football season. On August 18th, the De Soto Dragons played the Perryville Pirates for their first game. In this game, Snudden scored pushing De Soto one step closer to a win. Snudden is a wide receiver on the offensive line and the corner back on the defensive line. Snudden is number 22 and he is a varsity starter. We are ready to see what more Snudden has to offer this season, and the next two seasons to come, as he also plans to compete on the basketball and baseball teams this year.