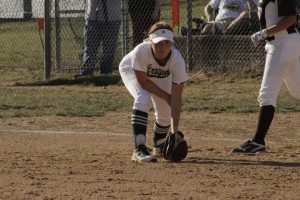 Lauren Murphy, senior, has played softball since her sixth grade year. Murphy has played on the DHS varsity softball team for three years. The  softball team played Farmington High for the last regular season game. In this game, not only did Murphy hit a grand slam, but it was her first home run of her softball career. When interviewed, Murphy tells us,  “Even though we were down by two I was just having fun and the bases just seem to be loaded when I was at bat. As soon as I hit the ball I could feel it just pop off my bat so I knew it had to be deep outfield but as I was rounding second it actually sunk in that I hit a grand-freaking-slam. It felt really good knowing that I could actually do that and I owed one to my dad before my senior softball season is over. So that one was for him and I still can’t believe that I really did that.”  We ended up winning that game. Murphy  helped the team to victory and DHS will miss her skills on the field next year.