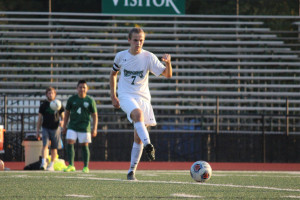 Nick Reiser, junior, is one of three captions on the DHS soccer team. Reiser has been on varsity all three years of high school, and he has played  all three years as number 7. So far this soccer season, Reiser has scored sixteen goals and has had four assists. Reiser has played soccer for 14 years. When Reiser was interviewed he stated, “I started to play soccer because I grew up watching my dad coach and play. He was always around soccer which meant that I was always around it. The sport just fit itself into my life.” His father, Nate Reiser, is the varsity soccer coach at DHS, so he gets to enjoy soccer as a family affair everyday. Nick is very successful when it comes to soccer; he evenplays for a select team, Lou Fusz FC Geerling. The select team is ranked second in state and ninth  in regional rank. Reiser is very successful in soccer and we all know he is going to go somewhere far with this sport .