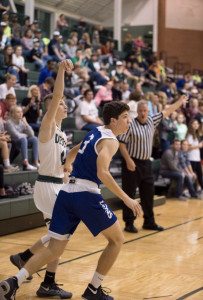 Q: What are your expectations for your first game this Friday?

A: I expect to start off Friday’s game the same way we ended the Jamboree against NW.  We were playing a fast tempo, aggressive style of basketball that NW didn’t have answer for.  For us to be competitive this year, that is the style of offense and defense that we will need to play.

Q: Do you think your team is well prepared?

A: I do feel like we are prepared.  One positive about our team this year is the number of upperclassman.  Having mostly upperclassmen makes it easier to prepare for teams because upperclassman pick up drills/plays quickly. Having experienced upperclassman also makes it easy to change offenses and defenses on the fly.

Q: How will this game set the tempo for your season?

A: Playing NW is a great game to start the season off.  They are a large school that can beat any given team on any night.  If we can execute our game plan and win this game, that should give us some momentum going into our Fountain City Tournament.

Good luck to the boys basketball team this season!